The Pioneers
The Black British experience is mainly characterised by the many Caribbean and African peoples who migrated to the UK. Black people have been living in Britain for centuries, however, Britain has been painted as a utopia that soon became a dystopia for many of the early migrants from the Commonwealth.

On June 22nd 1948, one of the most poignant moments for the multicultural Britain that we see today transpired: The Windrush docked in Tilbury. This was the first wave of mass migration into the UK by Caribbean folk. It is important to note that many of the Caribbean’s that had entered the country were INVITED by the government as the UK were suffering from shortages post-war.

Hundreds of Caribbeans started a long journey in the ‘Mother country’, full of hope, ambition and a, sadly, distorted view of what life in England will bring.

On a political level, they were blatantly prevented from creating wealth. An example of this was exposed in 2015, when it was revealed that Oliver Letwin, an aide to Margaret Thatcher back in the 80s, actively opposed any scheme that would foster any economic growth for black entrepreneurs and therefore black communities. He believed it would be wasted as it would only be spent on ‘discos and drugs’. He reiterated his point when discussing investment into the inner cities public services and facilities, by claiming black people lacked morals which is why they riot. (Oliver Letwin was also part of David Cameron’s government in 2010 and 2015, and is still part of Theresa May’s…wow).
Also, members of Parliament were guilty of hate speech. One such instance was the ‘Rivers of Blood’ speech, an infamous piece by Enoch Powell. Its focus is based on complaints about the increasing numbers of black people within the UK. The content of the speech could have been repackaged for the Brexit campaign, just replace ‘Black’ with Muslim, Asian or Eastern European and Nigel Farage could have sung it from the rooftops.  Unsurprisingly, this speech incited an increase in attacks against black people in the UK. 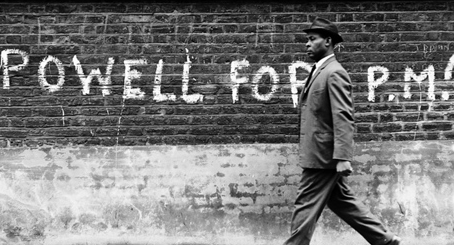 These government and ground level acts of racism became tiresome for many black men and women. Their communities were riddled with poor employment opportunities, lower income, poorer health, disproportionate bullying from the police and the blame shouldered for the economic downturn by their white counterparts. The government’s response to complaints about the black plight was dissatisfying and so many black people decided it was time to act. So 10 years into their stay, the Notting Hill riots occurred. Soon after, Brixton, Handsworth (Birmingham), Chapeltown, Toxteth (Liverpool) and St. Anns in Nottingham all followed.

Within football, it was a good representation of what it was like to be black in 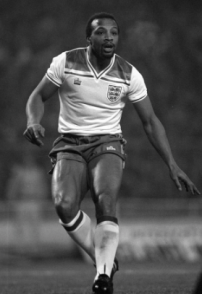 Britain. It was hard for black players to get a look in despite their obvious talents, and when they were appreciated, it was as athletes rather than intelligent players who could dominate a game with more than ‘power and pace’. So when three graceful, skilful and powerful black players lined up for West Brom; Laurie Cunningham, Cyrille Regis and Brendon Baston, they were greeted with bananas and boos from the crowd, including their own fans. Hate mail followed and some letters were even adorned with a bullet.

On to the church, the place where we all become as part of a body trying to elevate ourselves to a higher place. Was it safe there? Nope. But I guess it was Safer. Even within the church, my grandmother told me of her experience when she tried to attend a church but was swiftly rejected from a place of worship because of the colour of their skin. A. Whole. Church. This resulted in many Caribbeans pulling together to try to rent spaces within the community in order to have a place to worship as the house meetings they would have across the country began to overflow. They pooled their money to rent destitute or not fit-for-purpose buildings (e.g. nightclubs, bars etc), as these were the only places on offer to black people, and as a result they spent many a Sunday morning cleaning after the previous nights functions. Eventually a few groups were able to purchase land and or churches as they increased in membership and consequentially we have a rich number of predominantly Caribbean churches across the country. Many of the black churches we have now were birthed out of necessity rather than choice. Churches such as New Testament Church of God, New Testament Assembly, Ruach Ministries (White Lion Street), and COGIC, to name a few, have been around for over 50 years at least. Christianity has been and still is a staple of many Caribbeans lives, so to come to a country in which they believed they had shared values, this was a rude awakening to the bitter new world that they had become a part of.

One can’t help but wonder about the damage done to the psyche of many black students who were schooled in a country who brazenly deemed them as inferior. Our progression must have been stifled. I believe these things have played a part in the way Caribbeans have beenunderperforming within the education system, post-primary school, even to this day. Both genetically (Transgenerational Epigenetic inheritance is a contentious theory but is a relevant discussion worth researching) and experientially,the negative experiences and views passed down verbally and visually. This is why, historically, Caribbean men encourage their children to get learn a trade or any sort of paid work (being idle career-wise isn‘t going to cut it). Further education is definitely supported from all angles from nuclear families to church families, but it isn’t seen as much as a failure as it is for our African counterparts. It always hurts me to see this disrespect people have for Caribbean’s intelligence, especially considering that a large majority of us who chose to further our education and what field we would study in, came to that decision independently. Many great writers, thinkers and trailblazers have Caribbean heritage, alongside the brilliant entertainers and athletes produced (some are mentioned below) in an age where being black and ‘making it’ as anything other than an athlete or entertainer, was near impossible.

Black Caribbeans are pioneers. They paved the way for the success of black people (and many other races) in this day. Without their patience, sacrifice and hard work to be recognised as equals, where would we be? In June, it will be 70 years since the Windrush docked in England. I believe race relations have improved marginally, but in that time the racism has become more subtle as political correctness, rather than moral enlightenment, made it difficult to be overtly racist without consequences within the UK (we all know it still happens though).

Without you, we wouldn’t have the strength we have now. Because of you, we can Move.

P.S. I implore you all, including myself, to do more research to fully appreciate the magnitude of what they have done. Some good stories to start with Cyrille Regis, Laurie Cunningham, Brendon Batson, Trevor McDonald, Stuart Hall, Neil Kenlock, Joan Armatrading and Olive Morris.

This piece is my way of saying thank you to all of those who came before us.Though we are the most hated, Maya Angelou summed it up well. Still I rise. Still you rise. Still we rise.